In Anger and Mourning: Shireen Abu Akleh and East Buffalo

Please visit the Facebook event page to RSVP, and share on FB:
https://www.facebook.com/events/1324447661412389
Description of the event:
Two years ago on May 25, George Floyd was murdered by white police officers in Minneapolis. For two weeks now we have mourned the murder of Palestinian-American journalist Shireen Abu Akleh in the Jenin refugee camp in the occupied West Bank. And now we mourn the murderous white supremacist attack on residents of predominantly Black east Buffalo.
Why these and so many other racist killings? Why our ongoing anguish? What ties the lives snuffed out in the Jenin refugee camp in the occupied West Bank to the Black residents in East Buffalo injured or murdered by a white nationalist? It is racist oppression that binds these communities together. Whether it is a white supremacist’s bullets or shots fired by the Israeli Defense Force (IDF), racist terror is an integral part of the plan of the powerful few.
The United States and Palestine/Israel struggle in the grip of systemic, structural racism. The most obvious similarity is that Donald Trump and Benjamin Netanyahu shamelessly exploited racist nationalism to get, to hold, and to regain power. But the structural dimensions of racist suffering extend far deeper than national leadership. One in three Palestinians is unemployed as of 2019. Amnesty International decries the “deliberate impoverishment of Palestinians” by the Israeli government. As of 2019, 18.8% of Black Americans struggle to survive in poverty. Thirty-four percent of Jenin households suffer food insecurity. Buffalo activist India Walton (RootsAction) expressed outrage after the killings in her city that the supermarket where the racist murders occurred was the ONLY source of groceries in the whole food desert of the Black east side of Buffalo.
Inevitably, racist deprivation results in fierce resistance. Shireen Abu Akleh was bearing witness to her people’s struggle through her journalism. (“She was armed with a camera,” said Israeli authorities after her killing.) Israel does not want this graphic story told, hence her killing and that of 48 other Palestinian journalists in the past two decades. The outrageous attack on her funeral procession was designed to intimidate thousands of mourners from expressing their fury and sorrow at her murder. Likewise, the frequent attacks and murders by white supremacists in the U.S. serve to caution oppressed and terrorized Black people against expanding the struggle against racist oppression. The failure of politicians and police to suppress acts of racist terror, indeed, their frequent encouragement of or participation in them, emboldens these vicious killers toward more and more extensive attacks.
On May 25th, we will redouble our commitment to action. Mayor Adams is sweeping primarily Black and brown unhoused people out of subways, off the streets and into inadequate, often dangerous shelters. A New York Times editorial recently stated that the mayor has regressed to a 1994 level of oppressive policing. In the mideast, the U.S. is doing virtually nothing to secure justice for Israeli Palestinians. Outrageously, Secretary of State Blinken described the Israeli police as “intruding into the funeral procession” of Shireen Abu Akleh, as if they were merely uninvited guests rather than troops in para-military gear attempting to tear the Palestinian flag off the coffin while beating the pallbearers and crowds of mourners with clubs. This is not the kind of advocacy needed by our Palestinian sisters and brothers.
On May 25, we will honor the lives of George Floyd, Shireen Abu Akleh, and the Buffalo victims by coming together in renewed and active solidarity, resistance, and fellowship with all victims of structural racism and white supremacy whose lives are systematically impoverished and destroyed by ruling elites.
#SayTheirNames
George Floyd
Shireen Abu Akleh
The 10 people killed in Buffalo:
Roberta A. Drury of Buffalo, N.Y. – age 32
Margus D. Morrison of Buffalo, N.Y. – age 52
Andre Mackneil of Auburn, N.Y. – age 53
Aaron Salter of Lockport, N.Y. – age 55
Geraldine Talley of Buffalo, N.Y. – age 62
Celestine Chaney of Buffalo, N.Y. – age 65
Heyward Patterson of Buffalo, N.Y. – age 67
Katherine Massey of Buffalo, N.Y. – age 72
Pearl Young of Buffalo, N.Y. – age 77
Ruth Whitfield of Buffalo, N.Y. – age 86
Three people suffered injuries that have been deemed non-life threatening:
Zaire Goodman of Buffalo, N.Y. – age 20
Jennifer Warrington of Tonawanda, N.Y. – age 50
Christopher Braden of Lackawanna, N.Y. – age 55 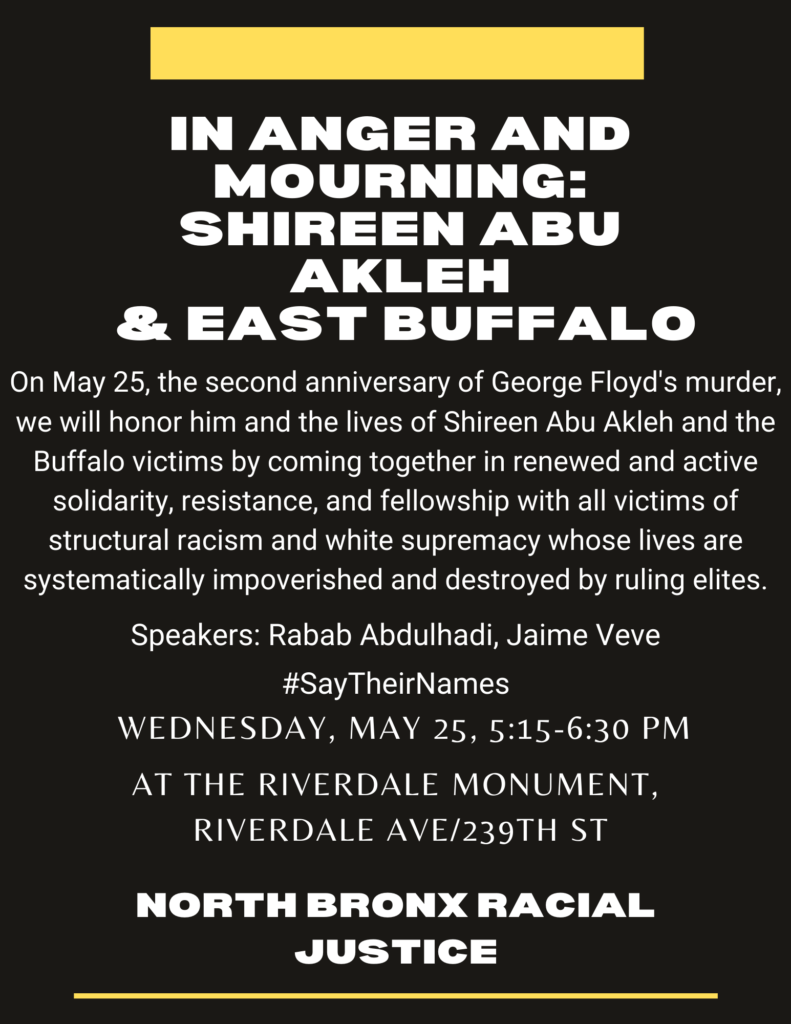