WESPAC is a member of the Hudson Valley Community Coalition which is working hard to change the public discourse around immigration: http://hvccoalition.org

I have been in touch with Pastor Jeff Geary here at the White Plains Presbyterian Church.  We need a team of medical volunteers who will help people who are going on hunger strike as an act of desperation to pressure our electeds to create a Fund for Excluded Workers.  Over 1.1 million New Yorkers have not qualified for any stimulus package or unemployment compensation since the start of this pandemic a year ago and have reached breaking point and complete desperation.  Some of them will be starting a hunger strike on March 15th.  Please sign up if you can serve as a member of a medical volunteer team to monitor their health.  Details below and thank you in advance:
Medical Volunteer Team
Street Vendors, Domestic Workers, Laundry Workers, Sex Workers, Construction Workers, Delivery Workers & more need your medical expertise and support!

Excluded and essential workers are the lifeline of our country and they’ve been left out of all forms of financial relief during the pandemic. This includes undocumented and recently incarcerated people, and cash economy workers. In fact, 1.2 million New Yorkers are excluded from receiving a single cent of state unemployment benefit or stimulus relief. For over 350 days, our community members continue to face financial peril, hunger, and pending eviction.

Starting March 15th until April 1st, essential and excluded workers, and others, will put their bodies on the line by launching a hunger strike across the greater NYC area. These workers are calling for an Excluded Worker Fund providing direct cash assistance to thousands in need to be included in the NYS budget on April 1st, 2021.

We need YOU to help us pull this off by medically supporting our strikers remotely or in-person during the strike! We especially need medical professionals (doctors, nurses, physicians, medical students) to support the strikers in Westchester, specifically at White Plains Presbyterian church. This means monitoring or supervising the health of a group of strikers. By signing up, you’ll be introduced to our medical volunteer team leaders who will brief you on your responsibilities and schedule you for shifts between March 15 – April 1st based on your availability.

Please fill out the medical volunteer form and someone from the Fund Excluded Workers (FEW) campaign will be in touch with you to coordinate additional details.

Thank you for your support!

For more information about the campaign, visit: https://fundexcludedworkers.org/

WESPAC fully supports this campaign and we will be reaching out to our community partners to sign on.  This Town Hall scheduled for next Tuesday will be a great opportunity for us to learn more about the campaign as we move to promote this urgently needed fund for excluded workers:

“Please save the date for our Excluded Worker Organization Townhall that we will be holding in partnership with the Fiscal Policy Institute next Tuesday, Sept, 29th from 6:30pm-7:30pm. Don’t miss this statewide exploration of New York’s need. RSVP for the town hall here. For more information about the Excluded Worker Fund, visit our campaign website here. Feel free to let me know if you have any questions!
Thank you,”
Vanessa Agudelo —

Now, more than ever, New Yorkers must stand united against fear and xenophobia, and our elected officials must stand ready to ensure every New Yorker across the state can access the essential services they need to keep their families safe and secure, regardless of legal status.

The New York Immigration Coalition, and our members, partners and allies, call on all levels of government to immediately enact these common sense measures to ensure immigrants across the state can remain safe and healthy.

This week, to collectively raise our voices around our federal needs, we will be engaging in a social media campaign and invite you all to join us. This toolkit contains messaging for the #NYUnited campaign asks at the federal level targeting Senator Schumer to take action to protect immigrant New Yorkers.
To amplify our efforts most effectively, please use the toolkit above to craft your message and post on your various organizational or personal social media pages during both dates & times below:

Feel free to share with your networks.
In solidarity,
Vanessa
—

For all details please visit: https://www.westchestersocialforum.org/

Information to inform ICE out of the Courts advocacy

New York’s top prosecutors, public defenders and advocates are rightly speaking out against a pernicious Trump administration policy that encourages Immigration and Customs Enforcement officers to roam the halls of state courthouses with the goal of targeting and arresting immigrants attending to official court business.

As documented by the Immigrant Defense Project, there was a 1,100% increase in incidence of ICE courthouse arrests in New York in 2017 from the previous year.

Immigrants are now afraid to attend court in any capacity — as defendants, plaintiffs, witnesses, victims or supportive family members. This impedes justice.

New York is not helpless in the face of President Trump’s harsh immigration enforcement machine. We believe that courthouse arrests are not only bad policy — they are also unconstitutional. Therefore, we urge the state’s top judicial official, Chief Judge Janet DiFiore, and the Office of Court Administration she leads to immediately adopt rules to restrict these civil arrests in New York’s courthouses.

“Everyone, regardless of their immigration status or the status of their loved ones, should have access to equal justice under the law,” state Attorney General Eric Schneiderman said in speaking out against courthouse arrests.

It’s not a platitude. The principle that equal justice requires access to court dates back to 18th century common law, which barred civil arrests for people attending court. In more recent iterations, the Supreme Court has recognized that the Constitution requires that “access to the courts is adequate, effective and meaningful.”

ICE’s policy of intimidation in effect closes the courthouse doors to immigrants. This not only tramples their rights — the Constitution isn’t only for citizens — but also infringes on the rights of people who may require immigrant witnesses in court to effectively present their cases.

Federal immigration enforcement officials claim that courthouse arrests are necessary for safety and efficiency, but this reflects a shortsighted view of what public safety means. The reality is that when immigrants are afraid to show up in court, our city becomes less safe.

New York City is home to 3.3 million immigrants, who, even if they have legal status, may fear the presence of ICE officers.

Our courts cannot function when 40% of our population believes that if they show up, they may suddenly be dragged off in handcuffs to face unrelated deportation proceedings.

New York must no longer let its justice system be used as a hunting ground. State courts throughout the nation, including in New York, routinely implement rules to ensure order and access to justice for litigants and witnesses. New York should implement rules like those proposed by the Immigrant Defense Project and others, which would flatly prohibit civil arrests in the courthouse unless the arresting officer has a judicial warrant or order, and prevent court resources from being used to assist ICE.

Rules like these are important, timely uses of courts’ longstanding authority to regulate judicial spaces. While the public nature of the courthouses is often held as sacrosanct, this has never meant that those who visit them are free from regulation. On the contrary, the New York State Court of Appeals has repeatedly recognized “the inherent power of the court to preserve order and decorum in the courtroom, to protect the rights of parties and witnesses, and generally to further the administration of justice.”

New York courts have accordingly upheld rules restricting the courthouse presence of bail bondsmen, the press and even the general public when necessary to prevent interference with proceedings and prejudice to litigants. The disruption and chilling effect of courthouse arrests surely meets the same standard.

The fact that a rule restricting civil arrests in courthouses would apply to a law enforcement agency, and a federal one at that, does nothing to diminish New York courts’ authority in this respect. In fact, many courts have adopted rules, such as restrictions on carrying firearms, that regulate law enforcement officers’ conduct within courthouses.

As long as ICE threatens the sanctity of our state courthouses, New York has an obligation to push back — to ensure meaningful access to justice for all those who may have concerns about their immigration status, but rely on our courts to vindicate their rights to protection, child custody, housing and a fair defense in criminal proceedings.

Ultimately, New York not only has the authority to prevent this threat to the administration of justice in its courts, it has a duty to do so for the many New Yorkers who depend on them. 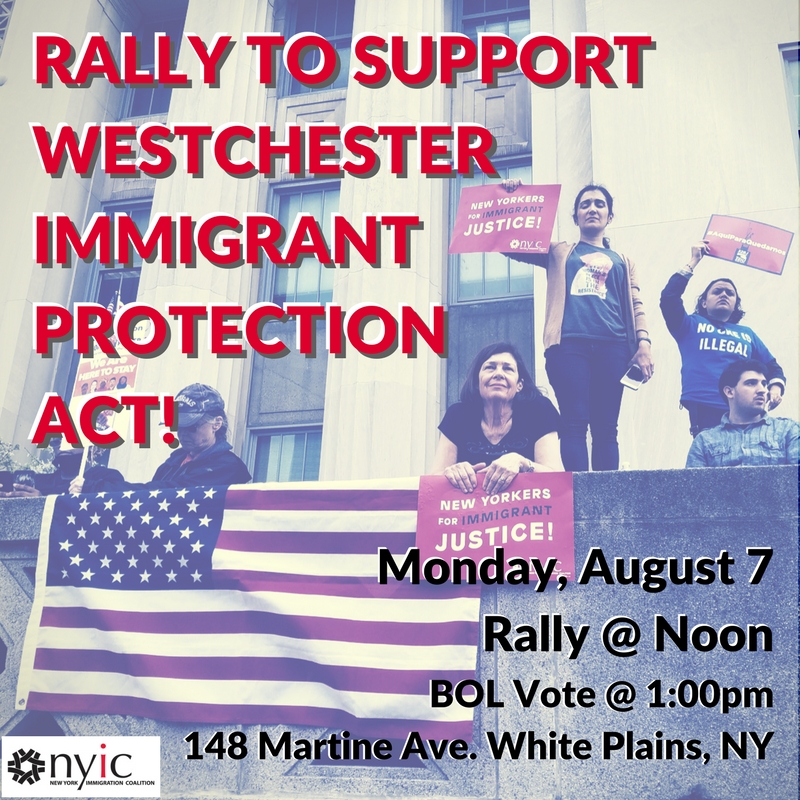 https://www.facebook.com/events/1279221495448692/
The Westchester Social Justice Community, a network of progressive groups, will gather for the 8th weekly Justice Monday on Monday, March 20th from 12-1 pm at the Renaissance Plaza Fountain at the corner of Main Street and Mamaroneck Avenue in downtown White Plains. The weekly rallies include speakers who highlight the pressing issue of the week, as well as community members who have personal experiences to share. The goal of the gatherings is to engage with the public in a common space at a time when our basic rights are being threatened by policies of the new administration.

Rally with us on Monday, March 20th at 12 noon in downtown White Plains to support public education in our next installment of Justice Mondays!

Our vital institution, a cornerstone of our democracy, is under attack at every level. The Trump/DeVos agenda at the federal level, along with the push in Albany to send our tax dollars to charter, private and religious schools together pose an existential threat to public education. Silence equals acceptance. Join us to fight back!

Groups that are part of the Westchester Social Justice Community:

Up and Up Action Initiative: https://www.facebook.com/UUAction/?fref=ts The New York State Farmworker Fair Labor Act (S.1743/A.1792) will, when enacted, allow for basic labor protections many of us take for granted: overtime pay, disability insurance and the right to collective bargaining – rights which the New Deal guaranteed a most workers decades ago, excluding farmworkers. The individuals who cultivate and pick the items we consume daily deserve the same rights as the rest of us. Our speakers will reveal how food justice models can turn our meals into an act of activism and a way to preserve the dignity of our workers. Join us to learn more about how policy, or the absence of one, intersects with our daily living! Action items will be presented on how local efforts can make these reforms a reality.

The Union of Land Workers is Creating a New Food Paradigm in Argentina. WESPAC Board member Delia Marx is looking forward to when she can continue leading tours again to Argentina! nacla.org/news/2021/04/06/land-workers-argentina-food-sovereignty ... See MoreSee Less

The Union is connecting people in the Buenos Aires Metropolitan Area with fresh, organically-grown fruits and vegetables.
View on Facebook
· Share