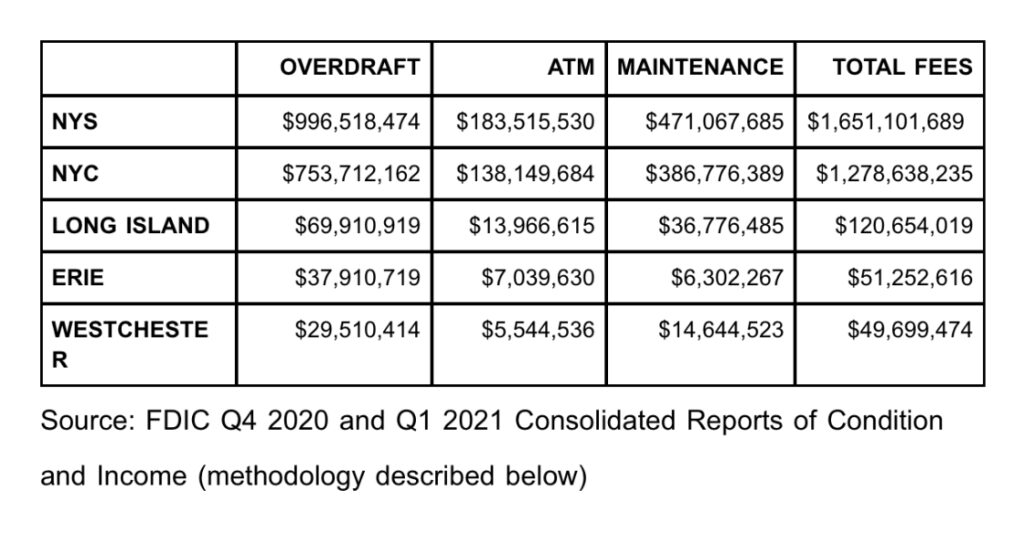 Westchester, NY – Today, racial and economic justice groups from the NYS Community Equity Agenda coalition released a new analysis estimating that banks have exacted more than $1.6 billion in fees from New Yorkers since New York declared a state of emergency last March, and nearly $50 million in Westchester County. They stressed that banks’ overdraft fees, in particular, target low-income and Black and brown New Yorkers and push people out of mainstream banking. Banks exacted $1 billion in overdraft fees alone statewide since the start of the pandemic, according to the groups’ analysis.

“It’s outrageous that we continue to allow these banks that exploit our communities to hold our public dollars. A well functioning public bank is vital for the economic prosperity of our region,” said Nada Khader of WESPAC.  “We need a public banking institution that serves our community’s needs and that uses our public monies to invest in affordable housing, renewable energy and infrastructure development while also moving us towards racial equity and living wages.”

As has been widely reported, predatory overdraft fees disproportionately siphon money from low-income people and people of color, including those hardest hit by COVID-19. Just nine percent of all account holders pay 84 percent of the billions in overdraft fees that banks exact, according to the Center for Responsible Lending. These account holders typically carry low balances—averaging less than $350—and have relatively small monthly deposits.

“As New Yorkers struggled, banks smuggled massive sums in predatory fees out of hard hit communities of color,” said Andy Morrison of New Economy Project. “New York must divest from banks that exploited New Yorkers during the worst public health and economic crisis of our lifetimes, and get serious about public banking. We need Albany to pass the New York Public Banking Act this session.”

Community development credit unions and other local financial institutions across the state have come out in support of local public banks, which they say would partner with them to help grow, expand and diversify their loans and services statewide. These community development financial institutions, advocates said, do not charge overdraft and other fees that advocates say are unfair, extractive and disproportionately impact low-income Black, brown and immigrant communities.

The NY Public Banking Act (S1762A/A5782), a top priority for the Equity Agenda coalition, would pave the way for local governments to create their own publicly-owned financial institution that would hold municipal deposits and reinvest in cooperative and community-led economic development, including permanently-affordable housing, small and worker-owned businesses and other community needs. The legislation has been co-sponsored by 21 State Senators and 44 Assemblymembers, including Westchester’s Shelley Mayer, Jamaal Bailey, Alessandra Biaggi, Chris Burdick, and Sandy Galef.

To assess the amount of bank fees charged in New York, the coalition examined quarterly Consolidated Reports of Condition and Income that banks are required to file by the Federal Financial Institutions Examination Council (FFIEC). Banks report only the total amount in fees charged to all customers. The coalition estimated the amount of fees charged to New Yorkers based on each bank’s share of deposits in New York, according to the Federal Deposit Insurance Corporation‘s Summary of Deposits Annual Survey.