By Taryn Finley
huffingtonpost.com
06/27/2017
A new report found that adults view young black girls as less innocent and more adult-like than white girls starting as young as 5 years old.
“Girlhood Interrupted: The Erasure of Black Girls’ Childhood,” released on Tuesday by Georgetown Law’s Center on Poverty and Inequality, shows that society’s perception of black girls leads to their “adultification.” The report shows that adults believe that black girls seem older than white girls of the same age, and think that black girls need less nurturing, protection, support and comfort than white girls. It also found that people assume black girls are more independent, know more about adult topics and know more about sex than young white girls.
The report ― which built on information from a 2014 study by Phillip Goff that found that black boys are more likely to be viewed as older and suspected of crimes starting at age 10 ―is the first of its kind to focus on girls. Researchers surveyed 325 adults from racial and ethnic backgrounds in a ratio that mirrors the country’s population. Many of the adults surveyed had a high school diploma or higher. They found the biggest differences in the ways adults view children in the age brackets 5-9 and 10-14. These differences continued to a lesser degree in the 15-19 age bracket.
Rebecca Epstein, lead author and executive director for the center, and Jamilia J. Blake, co-author and an associate professor at Texas A&M University, broke down the relationship adultification has on the ways black girls are disciplined during a press conference call Tuesday.
“One reason this might be occurring is because black girls are being held to the same stereotypes we have of black women,” Blake said. “Black women have historically and currently been seen as being aggressive, loud, defiant and oversexualized. And I believe, along with many other researchers, that the stereotypes of black women are being mapped on to black girls.”
The report stated that “potential implications” for the findings could be research exploring how these perceptions of black girls affect how they are disciplined at school and beyond. Black girls are five times more likely to be suspended as white girls and twice as likely to be suspended as white boys, according to research used in this study.
And though they make up less than 16 percent of the female school population, black girls account for 28 percent of referrals to law enforcement and 37 percent of arrests. Black girls are also almost three times more likely than white girls to be referred to the juvenile justice system and 20 percent more likely to be charged with a crime. 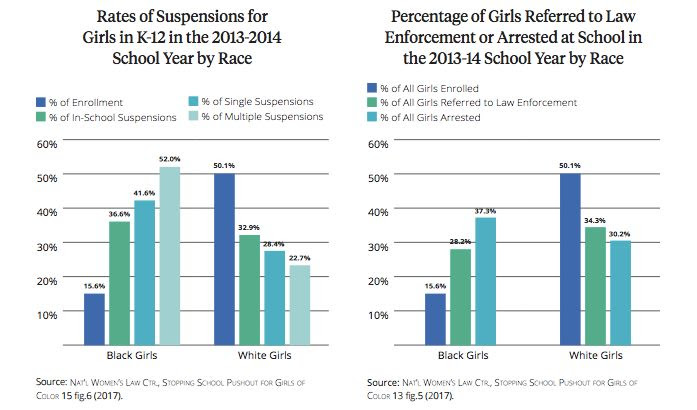 Georgetown Laws Center on Poverty and Inequality
“The consequences of entering the juvenile justice system can’t be ignored,” Epstein said. “As we know, it can change the course of a girl’s life. But despite these startling statistics, there’s precious little research about why this different treatment happens; why are black girls subjected to more discipline and greater contact with the juvenile justice system? And at the center, we wanted to look at those possible root causes.”
During their research, Epstein recalled talking to a young black girl who said her teacher told her, “You’re just like an angry black woman.”
Blake said these attitudes take away from black girls having a childhood.
“There’s kind of this social stereotype and of course there’s something about being resilient, being independent, but when this stereotype is put on girls at a very young age, it really robs them, whether they realize it or not, of this kind of naiveté of being a child,” she said.
The authors said they hope that researchers and teachers examine the “causal connection between adultification and harsh treatment,” and that policymakers make concerted efforts to counteract this bias. Epstein said Georgetown Law’s Center on Poverty and Inequality will being doing its part by creating an initiative on gender justice and opportunity later in the year. In all future related efforts, Epstein said it’s essential to center those affected the most.
“In all of this work, voices of black girls themselves should be front and center to the work,” she said. “We encourage black girls to raise their voices about this issue and, of course, for adults to listen to them. All black girls are entitled to and deserve equal treatment, including equal access to the protections that are appropriate for children.”