Hundreds Come Out in Support of Police Accountability 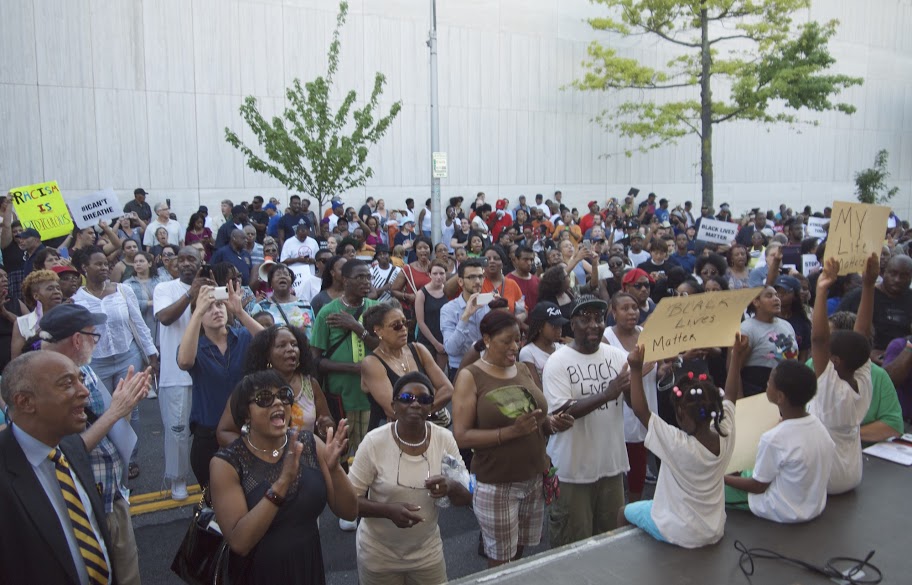 Hundreds Come Out in Support of Police Accountability

By A. Surya Peterson

The first stop along the route was 135 South Lexington Avenue where WESPAC Director Nada Khader was invited to re-tell the story of the police killing of Kenneth Chamberlain, Sr, in November 2011.  Rev. Lynn Dunn, Minister for Christian Education and Spiritual Formation at the White Plains Presbyterian Church led the gathering in prayer.  Kenny Lee, a retired White Plains Police Officer, played “Taps” in honor of the loving memory of former marine Kenneth Chamberlain, Sr.

Reverend Franklyn Richardson of the historic Grace Baptist Church in Mount Vernon addressed the crowd.  Rev. Richardson is the Chairman of the National Action Network, an activist group founded by the Reverend Al Sharpton.  He offered some suggestions for addressing the state of racialized policing today.

Imam Ali from Yonkers, a religious cleric of the Islamic tradition, shared his vision of a brighter America where we will all live in unity and respect for one another.  He was followed by Reverend Kymberly McNair, the Minister of Community Education and Engagement at the Bedford Presbyterian Church, who shared with us the challenges in confronting institutional racism in our society.

Kenneth Chamberlain, Jr, the son of police slain Kenneth Chamberlain, Sr., spoke about the need for police accountability and reform.  He is a co-founder of the Westchester Coalition for Police Reform of which members were very visible in the crowd.  The demands of this coalition include working to:

The next meeting of the Westchester Coalition for Police Reform will take place on Thursday, July 28th at the Thomas H. Slater Center located at 2 Fisher Court in White Plains, NY, at 6:30pm.

The Director of the Thomas H. Slater Center, Heather Miller, spoke about the importance of voting and registering to vote.   She explained that the formerly incarcerated are allowed to vote in New York State and that part of making change is participating in the electoral process.

The last presentation was from Jirrell Abraham, a local poet and spoken word artist and member of the H.I.P.H.O.P. group  Highly Important People Healing Our Planet.  His performance is available on social media.

Several community organizations were present for the march including the Westchester Martin Luther King Institute for Nonviolence (the MLK Institute convenes the Westchester Coalition for Police Reform), the Urban League of Westchester, the Anti Racist Alliance of Westchester, the African American Men Of Westchester, the Theodore Young Community Center, the Loft LGBT Community Center,  Mount Vernon Tenants Association, Westchester Disabled on the Move, WESPAC, Hope’s Door and several more.  Families came out with children on their strollers and members of the Police Guardians Association were with us on motorcycles.  We were just steps from where Westchester County Police accidentally killed Mount Vernon Detective Christopher Ridley in a scuffle outside of 85 Court Street in January of 2008.

The march and gathering represent a significant step towards improving police and community relations with greater accountability and transparency for all.