Justice for the Wrongfully Incarcerated 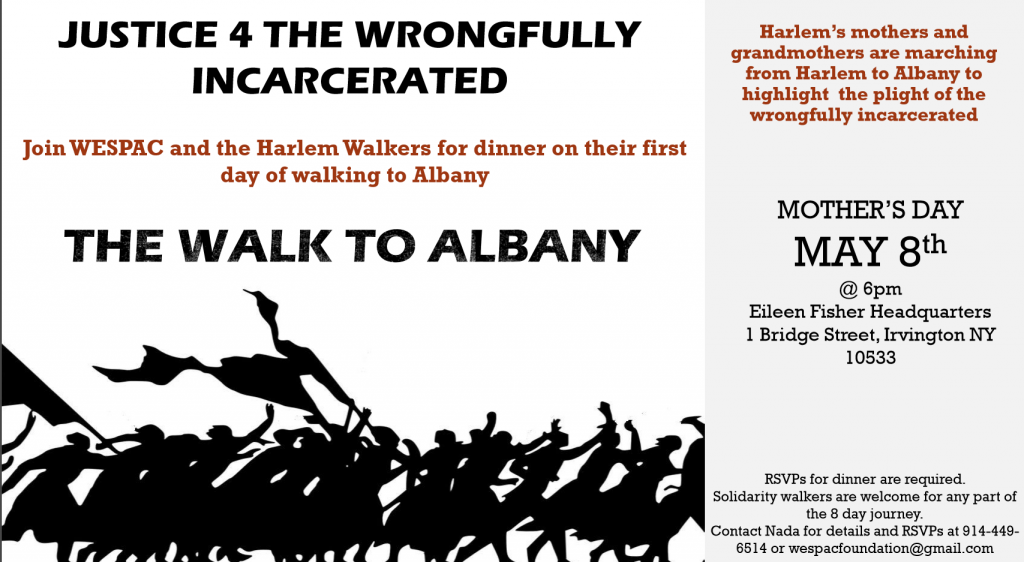 Over 90 people have registered to join family, friends and loved ones of the wrongfully convicted for an eight day march from Harlem to Albany starting on Mother’s Day, May 8th, 2016.  20 walkers are committed to walking for the whole eight days in order to highlight the plight of the wrongfully convicted and to demand specific legislative reforms found at http://justice4thewrongfullyincarcerated.org/what-we-demand/

Locally in Westchester County, a 42 year old social justice organization WESPAC will host the marchers for a community dinner on their first day, Sunday, May 8th at 6pm at the Eileen Fisher Institute located at 1 Bridge Street in Irvington, NY.

The Peekskill branch of the NAACP will host the marchers on Monday evening, May 9th at 7:30pm at the Kiley Center located at 709 Main Street in Peekskill for an open public forum where we will hear from Yusef Salaam, exonerated member of the Central Park 5, who spent over five years incarcerated for a crime he had nothing to do with; we will also hear from his mother, activist and lead organizer of this march, Sharonne Salaam.

Jeffrey Deskovic will also serve as a featured speaker.  He was wrongly convicted in 1990 at the age of seventeen of raping, beating, and strangling Angela Correa, a 15-year-old high school classmate at Peekskill High School, and spent sixteen years in prison for a crime he did not commit.

Justice4theWrongfullyIncarcerated: An Unprecedented Social Campaign For The Wrongfully Incarcerated

What:  Justice4theWrongfullyincarcerated is a campaign to spur legislation to end the continuance of injustices inflicted upon the wrongfully incarcerated.

Who:  The Justice4theWrongfullyincarcerated team is being led by prison Salaam, exonerated member of the Central Park 5 and his mother, activist Sharonne Salaam.

Why:  The American Judicial System has victimized many innocent people and their families who come from predominantly communities of color. Your advocacy is needed to make positive changes in legislation. This campaign was created to represent those who have been and are still being victimized.

How: Justice4theWrongfullyincarcerated will march to Albany to help bring legislative change and national awareness to the continued injustices against and sufferings of those who have been wrongfully incarcerated and their families.