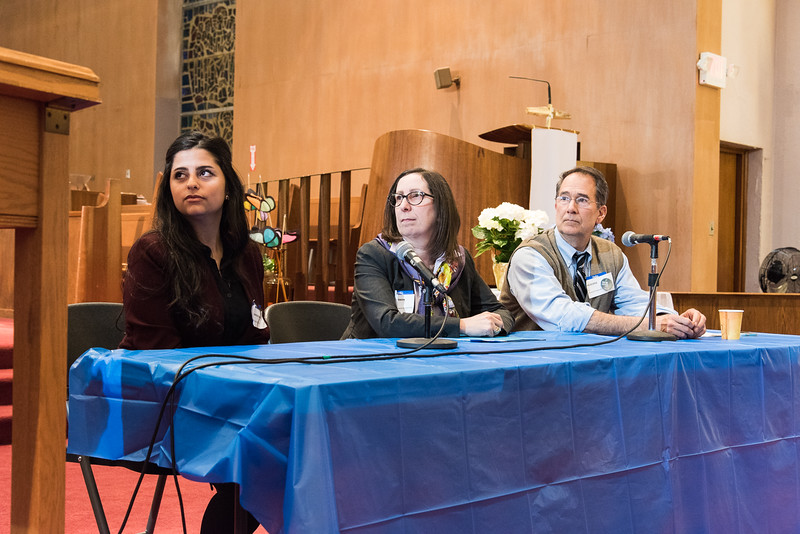 Following war in the Middle East that left thousands killed, millions in need of humanitarian aid and a displaced population, Westchester, Rockland and Hudson Valley community groups and agencies held a panel on Tuesday evening, April 5th, at the Memorial United Methodist Church in White Plains, New York, calling on our local communities to respond urgently to the Syrian refugee crisis.

The moderator of the panel, Westchester MLK Institute Executive Director Doris Dalton introduced Vice President of External Affairs at the Hebrew Immigrant Aid Society (HIAS) Riva Silverman to provide information about the Syrian refugee crisis, which also appeared on the back of the programs handed out. Silverman mentioned the highly profiled incident that occurred in the news in September 2015 of Alan Kurdi, the three-year-old boy who drowned while crossing the Mediterranean Sea as part of the crisis. Kurdi is one of 2,800 desperate people who has died crossing this sea in attempts to escape wars, violence, famine and unlivable living conditions.

Since 2011, 220,000 people have been killed in the Syrian conflict; 12.8 million are in urgent need of humanitarian aid and 50% of the population has been displaced. According to the United Nations High Commissioner for Refugees (UNHCR), 4.2 million Syrian refugees have been registered in Lebanon, Turkey, Jordan, Iraq, Egypt, and Europe.

Silverman stated a line from Emma Lazarus’ most famous poem “The New Colossus,” in response to the conflict, which appears in a bronze plaque on the pedestal on the Statue of Liberty: “Give me your tired, your poor, your huddled masses to breathe free.”

Since countries like Russia, Japan and South Korea, whose national GDP is relatively high, have not offered asylum for these refugees, Silverman, along with others in the campaign for safety and dignity for refugees is urging the U.S. government leaders and citizens to allow refugees into  the United States.

George described the impact working at a Syrian refugee camp thirty years ago that deeply impacted his life. “It’s not the horrible smell of the raw sewage, it’s not the suffering of traumatized people and it’s not what the refugees felt towards me,” George said. “What I remember was the amazing hospitality. They gave me a lesson of generosity.” Although lacking food and money, George said the refugees would, “offer tea and spend the little they had to buy cookies.” Despite their suffering, “they will shake off any anger” they had towards countries who did not offer assistance.

George told the audience what he said to the refugees in appreciation, which led him to start his own refugee camp: “If you ever come to the U.S., I want to show you the hospitality that you have showed me.”

After learning that governors in certain states made public statements saying they would not accept Syrian refugees, George reached out to Connecticut Governor Dannel Malloy. George asked if he would be willing to welcome families, and according to George he responded, “Of course,” stating words from the U.S. constitution: “We should not discriminate against anyone based on race, color, religion, sex, or national origin.” Last year, 240 refugees were welcomed and IRIS promises to welcome 420 more.

George then welcomed Syrian activist Sana Mustafa, 24, who along with her relatives are victims of the crisis. “When the revolution began, we thought we were born again,” Mustafa said, referring to Syria. “We wanted to protest and overthrow the government of 55 years, but that came with a price.”

Mustafa explained how her family became refugees due to her father’s political views as a human rights activist. Her father was detained twice and a few weeks later, Mustafa and her sister were detained. In March 2013, Mustafa was approved to start an academic program in the U.S. for a period of six months. She never made it back home to Syria; she has been in the country since June 2013. Her sisters and her mother fled to Turkey. With no money or possessions, Mustafa met a friend who introduced her to other friends and had to move to nine different homes, “just trying to survive.”

A month after her arrival in the United States, Syrian regime forces had taken her father, leaving the family wondering if he is dead or alive. “If you are against the government, no matter what you will be kidnapped and detained,” said Mustafa. She also mentioned that her father’s friend was tortured to death. “If I am told my dad is dead, should I believe it?” asked Mustafa.

Despite the horrors of the Syrian government, Mustafa is told by others that she is well put together, but argued that “being a refugee doesn’t mean you are poor or means you are in a bad situation. We should work on stereotypes and perceptions of people. I am just as privileged as you are to be here.”

Now a final year undergraduate at Bard College, Mustafa still has faith in humanity. “It is my chance for you and me to give back to the world and maybe we can start tonight.”

“How can we really help Syria if we don’t focus on the main problem, which is the U.S. foreign policy?” A man in the audience asked.

“Stability and security are the the only solutions,” said George, encouraging everyone to connect themselves with groups and start organizations like IRIS in their community. “It is a global effort.”

“What are some things high schoolers can do to help the refugee crisis?” asked Chioma Uruakpa, a student at Ossining High School.

“Awareness and education is very important because kids have an option to learn something different,” responded Mustafa, encouraging Uruakpa to continue discussing the topic in school.

In closing, Silverman suggested the audience listen to a statement from political commentator John Oliver about the refugee crisis and watch videos of Mustafa. Dalton then asked the audience to stand for a moment of prayer.

“I thought the event was really informative. It gives a real basis of what we can do,” said Uruakpa.

“I think it was very moving. It creates different perceptions in our community especially to those who are unaware of the refugee crisis and process,” said Nya Chambang of Stamford Interfaith Refugee Settlement (SIRS).

“It was a wonderful turnout. I am glad I came,” said Fozia Khan of the American Muslim Women’s Association, whose organization she said is “helping the Syrian refugees the best that we can.”