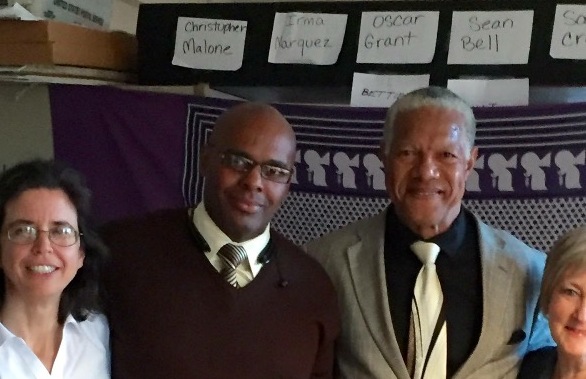 For many years, police have been able to harm, maim and kill unarmed people of color with impunity.  This timely topic was why the Antiracist Alliance of Westchester invited human rights educator and activist Rev. Daniel Buford to speak at WESPAC on Monday, March 28th about his research on US law enforcement human rights violations, arbitrary punishment and killing in the context and language of international human rights law. Examining unarmed encounters between blacks and law enforcement for over 40 years, Buford has uncovered trends and patterns in terms of the ways that people of color are targeted and killed.

At the beginning of his presentation, Rev. Buford commended Sandy Bernabei, founding member of the Anti-Racist Alliance for her unrelenting commitment to Undoing Racism with the Peoples Institute for Survival and Beyond and for her unwavering commitment to racial justice. Buford explained the context of how he began his research by recording every unarmed police encounter that he has either witnessed or read about.

The first police incident that he includes in his research was the fatal shooting of two members of the Black Panther Party, Fred Hampton, 21, and Mark Clark, 22, in 1969. He mentioned familiar names in recent incidents such as Oscar Grant, Tamir Rice and Sandra Bland. Grant was fatally shot by BART police officer Johannes Mehserle who later said that he had mistaken his gun for a taser in 2009 in Oakland, California, a circumstance where Buford says “the majority of police killings began and similar methods have been repeated.”

Buford commended the Black Lives Matter Movement in response to the recent incidents, but expressed concern that there is “danger within the movement because people believe the ones who began the movement were them.” He said the movement began well before the civil rights era, with enslaved Africans struggling for their freedom, and connected this centuries old history with a quote from Dr. Martin Luther King, “I am a Man,” written on the picket signs in the 1968 protest after King’s assassination. “People must understand the roots,” Buford maintained as he stressed the importance of the current Black Lives Matter movement.

“We are at a certain time but how do you tell what time it is? Is there a such thing as being too late or punctual for that certain time of history?” Asked Buford as he described today’s era of technology with the use of cellphones to record police encounters and surveillance cameras that do not always provide sufficient evidence of misconduct. “We must look at the history, quality of life and liberty, social conditions and events of unintended consequences. What are the spiritual principles that are working in our time?”

When researching, Buford looks at men, women and children of African descent and also examines the human rights violations as defined by both the United States Constitution and the internationally recognized Universal Declaration of Human Rights.

“The imperative is not just to discuss human rights violations, but to prevent them,” said Buford.

When discussing the 2014 Tamir Rice case, Buford mentioned that Rice, of Cleveland, Ohio, had a toy gun in an open carry state. The open carry law in Ohio permits those who legally possess firearms to carry these weapons publicly.

Buford then discussed the many different ways that law enforcement has killed black folks in more recent incidents such as the asphyxiation from a chokehold of Eric Garner of Staten Island, New York in 2014 and the spinal cord injury of Freddie Gray, of Baltimore, Maryland in 2015 from an unsecured police van ride casually known as “rough rides”.

Buford related the innocent death of people of African descent to captive slaves who were prisoners of war in Africa. “Since the time we were brought here, we have never been treated like citizens,” he said, referring to the blacks in the audience.

The statistics discovered in his research, Buford said, hold police accountable; he encouraged the audience to verify them with their own research.

“In the U.S., we must revise our methods so that we can discuss police misconduct,” Buford said as he explained how he set up the categories of law enforcement punishments and killings from 1982 to 2015.

Buford also mentioned the deaths of the elderly like the fatal shooting of 92-year-old woman Kathryn Johnston, who had 39 shots fired at her, but hit her five or six times in Atlanta, Georgia. Three officers had entered her home in what was described as a “botched” drug raid.

He described an incident that he witnessed in his hometown, Cincinnati, Ohio. There was a campus security officer out of his jurisdiction, checking license plates for violations. The officer had stopped an African American male student and shot him while the student’s foot was on the brake.

Buford explained that his categories have not been published because “there is no treaty up for review that the U.S. has ratified. There is a lot that we have to do to educate our community.”

Buford said he is preparing a shadow report for all human right treaties and will continue to file complaints at the United Nations, highlighting human rights violations committed by U.S. law enforcement that disproportionately impact the Black Community.

Local Greeburgh Town Clerk, Judith Beville, was in attendance and remarked: “I thought that his presentation was informative and educational, as it was based on factual data.  If there is to be a follow up discussion on this topic, I recommend that local police chiefs be invited to have an open dialogue on strategies for improving the relationship between the community and police.”

To end his presentation, Buford informed the audience about the significance of using Polaris (the brightest star in a constellation of stars close to the North Pole) not only for direction, but also as a symbol and aspiration for freedom.

“Right is always right, truth is always truth. You already know in your psyche and consciousness what the North Star of justice is,” said Buford.

“I thought the presentation was excellent and timely. His research is very important,” said President of the Westchester Coalition Against Islamophobia, Chuck Chesnavage.

“It made me think. My concern is getting the information out there for people to see. I always pick up something new here,” said Philip Likes, a longtime member of WESPAC Foundation.