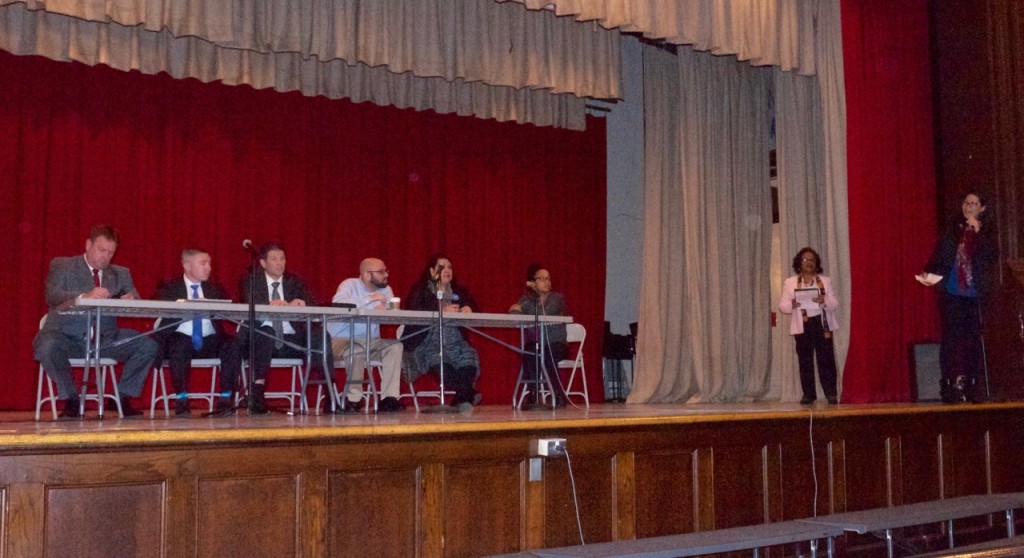 Questions have been raised about police body-worn cameras and whether or not they will improve the relationship between the police and the community. Almost a hundred people from all over Westchester County came out to hear a discussion about police body-worn cameras.  Panelists including Peekskill Police Chief Johansen, Ossining Police Chief Sylvester, Greenburgh Police Chief McNerney, NYCLU Regional Organizer Guisela Marroquin and Center for Constitutional Rights staffer Ian Head were able to answer some questions at a community forum sponsored by the Westchester Coalition for Police Reform at Eastview Middle School in White Plains on Monday, March 7.

There were a range of concerns regarding policies for the use of these cameras, including questions regarding whether they will be used for additional surveillance and whether the policies around their usage will be clear and consistent within the various municipalities in the county.

“Without this data, we run into years-long problems on trying to agree with something that is going to work,” said Marroquin.

Panelists agreed that this technology should be used to document civilian interaction with a law enforcement officer and generally should not be used for additional surveillance. Officers are instructed that they must announce that they are videotaping an interaction when they turn the body camera on.

Police Reform activist Kenneth Chamberlain Jr. asked the panelists if they would be willing to have a county-wide policy that all local police departments could agree on regarding the use of these body cameras, and the police chiefs were amenable to his suggestion.  The police chiefs clarified that officers may not have discretion on when they can turn the camera on, but when they turn it off. Turning the camera on is a requirement.

Following a recent video of the police shooting of 17-year-old Laquan McDonald of Chicago, a Greenburgh resident asked if the police department should be in charge of the storage of the video recordings and how they can determine whether or not a video was complete.

“I don’t think that the idea of having cameras on all the time should be left on the table,” said Head. “The use of technology creates the belief that it is the best way to have accountability.”

The panelists mentioned that there are supervisors who watch these videos of police encounters, and if they witness a crime or misconduct, they are required to report it.

Following the 2014 arrest of Ramsey Orta who recorded the chokehold of Eric Garner of Staten Island, it was also confirmed that it is legal for a civilians to videotape on officer interacting with a civilian as long as the video recording does not interfere with the police activity.

“What do you do when you find misconduct in the video?” asked CopWatch organizer Jose LaSalle. It was stated that it depends on the severity of the misconduct, which could potentially lead to the officer’s dismissal of the department. He also asked about the use of cameras if there is more than one officer on the scene and whether or not officers have privacy.

Member of the Westchester Coalition for Police Reform and retired NYC school teacher, Eleanor Ommani argued that education and youth programs may be cut from municipal budgets as departments scramble to purchase expensive police body cameras. “I don’t think technology will solve the problem,” she said. “It is not a solution when people are not equally treated. If you do not change the mindset of the police, there will never be a solution.”

“Cameras will not change humanity,” stated Bishop Preston of Greenburgh, who had a similar forum at his church. People must change, not technology. We must see results in diversity training. I have not witnessed any white person getting shot while running away from police.”

“We don’t want to see anyone getting shot,” said Dennis, a WESPAC volunteer, referring to people of all races.

“The body-cameras are not going to do anything!” said Regina Smith of New Rochelle. Smith had complained about persistent police misconduct and excessive use of force when interacting with youth of color.

“Officers know how to cover up things within their department,” commented local chef, Giovanni Green. He mentioned the April 2015 arrest of Freddie Gray which lead to his death three days later, stating that street cameras did not show footage prior to the arrest.

All in all, it was an important and successful community forum that brought together community members and leaders to engage in meaningful dialogue with local law enforcement.

#cleanslatecantwaitSAY IT LOUD: #CleanSlateCantWait. On Dec. 1 at 12pm, join us for rallies across the state to demand the end of perpetual punishment. Our lawmakers must pass #CleanSlateNY on DAY 1 of the legislative session. RSVP here: bit.ly/CleanSlateDec1 ... See MoreSee Less

We had an excellent rally today in White Plains for #CommunitiesNotCages! You can hear our speakers, Soulangie Leeper, Jolene Russ, Rabbi Mara Young, Assembly Member Chris Burdick and County Legislator Damon Maher on the WESPAC Facebook page here Explore WESPAC I will be in Ossining on December 1st to urge our state electeds to pass clean slate and would love to drive up with a nice size delegation: ... See MoreSee Less