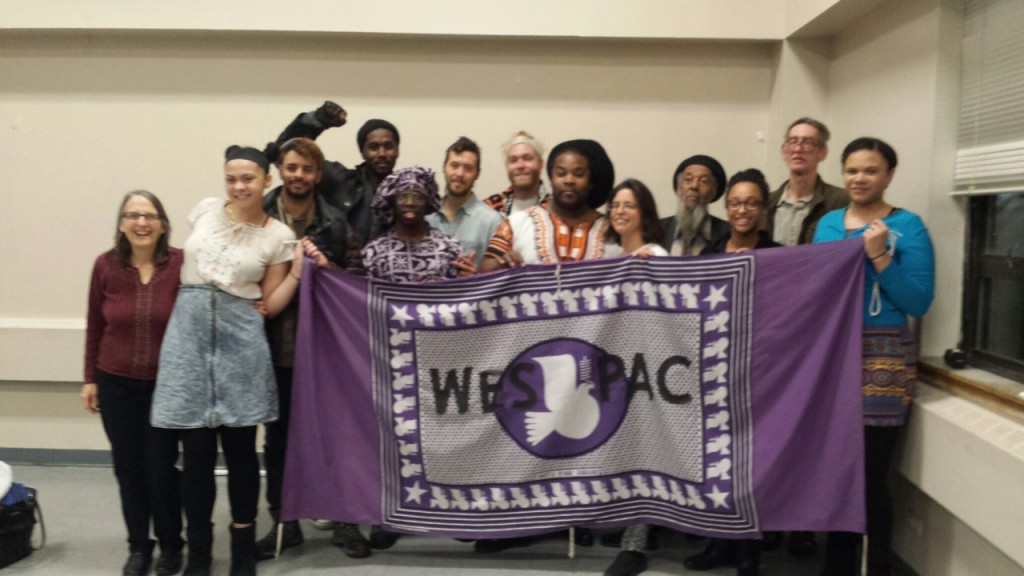 Building on campaigns to promote and educate on healthy food for those who are unable to access it, local farmers and activists joined WESPAC’s Food Justice Committee in celebrating our community self-reliance at the Thomas H. Slater Center on Thursday evening, February 25th, 2016.

Executive Director of WESPAC Foundation, Nada Khader, introduced Lineage Farmer and founder of Good Food For Hudson, Jon Ronsani, to discuss this food justice project he is building with his partner, Jen Ronsani, and many others.  Good Food for Hudson provides 20 weeks of farm fresh vegetables to low-income families in Hudson, New York, on a free and sliding scale basis. Ronsani had just completed his first season of the program and is now setting up a fundraiser to do the same program, adding new foods to his produce. He will introduce fresh farm eggs from Hearty Roots Farm and Camphill Copake’s fresh baked bread. Khader asked everyone to donate money for his campaign, raising more than $500.00 that evening for Good Food for Hudson.

To demonstrate how they grow and supply their produce to those who cannot afford healthy food, Ronsani presented his film, Good Food For Hudson.  “We believe that access to good food is a basic human right;  it is not a luxury,” said Executive Director of Hawthorne Valley Association, Martin Ping. “We are still actively exploring what role Hawthorne Valley may play in bringing food access into Hudson and the project with Lineage Farm; acting as a fiscal sponsor for Good Food For Hudson seems like a very logical first step.”

Alderwoman for D-2nd Ward Hudson Tiffany Garriga described the limited access to transportation for families to get the necessary nutrition in Hudson: “We have two supermarkets but it’s farther out, entering the next town, so if you don’t have a car or anything and rely on taxi services, it’s hard for you to shop.”

Lord Judah, emcee for the event and manager of music group H.I.P. H.O.P., which stands for Highly Intelligent People Healing Our Planet, then introduced local farmers Jalal Sabur and Doug DeCandia, who have worked together for five years. Judah has also been involved with WESPAC since 2006.

“There’s a sustainability model that people talk about. It’s like builders, weavers and warriors and making sure everyone has a role,” said Sabur. “There’s a group of builders I consider the farmers;  the weavers are the organizers that connect the warriors that are the families or people that don’t have access to food, the people in the front line of food or any injustice. Building with folks like Lineage Farms and other farms in the Hudson Valley help see that vision through.”

Sabur is the founder of Victory Bus Project and Freedom Food Alliance. Victory Bus is designed to provide affordable transportation for families in urban areas, such as the Hudson Valley to visit their loved ones in rural prisons and obtain fresh fruits and vegetables.

One public figure who has acted as a mentor to Sabur is political prisoner and former Black Panther, Herman Bell. Bell has been incarcerated for over 42 years. The Alliance, a project inspired by Bell, who is also co-founder of the Victory Bus Project is a group of small rural and urban farmers, activists, artists, community members and other political prisoners who address the issues of food, environmental, prisoner and economic justice.

DeCandia is the Food Growing Program Coordinator of Food Bank for Westchester and manages farms in five local areas:  Lincoln Watts School in Yonkers, School for the Deaf in White Plains, Woodfield Cottage Juvenile Correction Center, the Westchester County Jail in Valhalla and the Westchester Land Trust in Bedford Hills. He works with youth, inmates and volunteers, teaching people how to grow fresh, high quality organic produce in places that are experiencing food insecurity.  DeCandia and Sabur discussed the importance of nourishing and replenishing the soil with natural organic materials and the impact it has on our environment and personal health.

“Composting is creating earth to grow through recycling plants and other organic material,” said DeCandia. “Our self-reliance is diminished if we don’t have access to the basic needs of providing for ourselves and the community. Land is essential for that access and to our self-reliance and care of the land,” he maintained.

As part of Black History Month, Sabur mentioned figures like Harriet Tubman and Fannie Lou Hamer who were farmers. Similar to our current local farmers, Tubman grew food for people on the Underground Railroad. Hamer began the Pig Bank with the help of the National Council of Negro Women to improve the diets of people in her community by buying gilts and boars. Later, she founded Freedom Farm Cooperative that would provide the same food and economic independence to local people.

Sabur continues to envision possibilities of justice and sustainability with his new local farm Wild Seed, which is named after a book by Octavia Butler. This farm in Millerton, New York, is for black folk, including women, queers and those who have been impacted with mass incarceration. Currently, Sabur and his partners are making maple syrup. When asked why maple syrup, Sabur replied, “We got it from the indigenous community. The Iroquois taught us how to make it. During slavery, abolitionists used it as a way to boycott sugar plantations.” Sabur has also named the maple syrup “sweet freedom.”

“The main ingredient in all our dishes is love,” said Green, whose title, Chef D’Amour he said applies to his style of cooking.  “Break Bread Not Hearts is a culinary business that is based on supporting our agriculture,” said Green. Green has done catering, birthday parties, cooking classes at New Rochelle Public Library and taught food literacy. Food literacy, Green said is “health, hope and humanity, the notion that food is medicine.” This notion also “supports the food service’s philosophy ‘Cooking Up Community.’”

Musical artists and sisters Grace Galu and Kathleen Kalambay, formerly known as Kala, performed songs for the audience.Galu and Kala performed “Lean on Me” by Bill Withers. As a solo, Galu sung “Green Grass” by Tom Waits and her original song “Fire Light.”

Anthony Jones, 21, a member of WESPAC’s Food Justice Committee said, “I thought it was a great event for a great cause. What Doug and Jalal do and say is very powerful and knowledgeable in terms of growing food. I think we should have more events like this around Westchester County.”

“It was really nice. I liked the energy,” said member of WESPAC’s Food Justice Committee and Environmental Studies professor at Pace University, Tracy Basile. “I met wonderful people while munching on those delicious cookies.”

“It was one of the best events I have attended in years,” said Laurie Evans, another member of WESPAC’s Food Justice Committee. “It was helpful, educational and fun. The food was delicious and the music set the mood. When you are growing healthy food, that is creating the change that we want.”