Your Ice Cream is Free Today: Palestine is Not

Your Ice Cream is Free Today: Palestine is Not 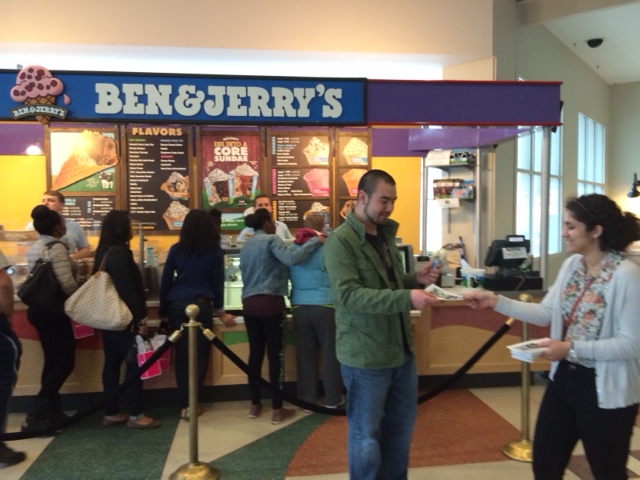 Since 1979 Ben and Jerry has been giving out free ice cream once a year.   Only serving their ice cream in Jewish settlements and not to the Palestinians, we felt as though there needed to be awareness among the consumers of Ben and Jerry’s.

Which is why today Nada Khader and myself went down to the Ben and Jerry’s located in the Westchester Mall in White Plains, Nework, to create awareness among the consumers.  As we made our way to the small stand we were immediately wary of one of the managers collecting money for a charity Ben and Jerry’s is sponsoring.  With each person coming out with their free scoops we handed out our pamphlets, non aggressively, for them to read.

Discretely, we made it through a majority of the pamphlets in half an hour before we were noticed by the manger collecting the funds for the charity.  Insisting on knowing what our motives were, while we stood around taking pictures,  she was persistent to know what our brochures were about.  When she was informed of our mission she surprisingly allowed us to continue

Proceeding  to take pictures and hand out of the information we were suddenly stopped by two managers of the mall and told we weren’t allowed to hand out flyers.  We respectfully agreed and began to leave but were still being watched.  On our way out we handed one out to every person with a cone as the managers stiffly watched our every move.  When they were aware we were still giving them out, one of them began to quickly follow us and was then was joined by two other men, presumably mall security.  Practically running out of the doors the manager stopped and glared us down until we were out of his sight.

On our way back an enormous group of school children were coming towards our direction.  We took the opportunity to inform them of the situation in Palestine.  Coincidentally, the school children were on their way to get their free ice cream so we gave them extra brochures to give the managers with “compliments from us”.

Overall  we successfully informed the public and hope that Ben and Jerry’s will change their policies of selling their ice cream in these settlements.

Please see relevant documents attached including an open letter to Westchester Reform Temple:PRESS RELEASE Jewish Educator Fired Over Blog Critical of Israel Sues January 25, 2022 New York – Jessie Sander today filed a lawsuit in the Supreme Court of the State of New York, Westchester County, against Westchester Reform Temple (“WRT”), two of its rabbis and its executive director, for wrongful discharge pursuant to Section 201-d of the New York State Labor Law. As set forth in the attached complaint, Ms. Sander started work in early July 2021 as a secular Jewish educator in WRT’s school, the Jewish Learning Lab (“JLL”). She was hired to teach and tutor the Hebrew language and to assist and support the development of social, cultural and community service programs for WRT teens. Nothing in the job or job description required any adherence to any particular point of view about Israel or its policies toward the Palestinians.Nevertheless, WRT fired Ms. Sander after less than three weeks on the job, not for any teaching deficiencies or criticisms she received, but solely because of a blog post she and a friend had written months before her WRT employment began that severely criticized the State of Israel for its May 2021 bombardment of Gaza. In that post, Ms. Sander affirmed her passion for Judaism, her investment in building Jewish community, and her commitment to fight for justice for all Jews; and identified herself as an anti-Zionist opposed to what she believed to be a legalized apartheid regime in Israel at odds with Judaism or any other religion. After reading the blog post, the Rabbi who had hired her and who directs the JLL met with Ms. Sander, engaged in a frank discussion of their respective views, and told her that he and WRT’s school embraced a “wrestling with Israel” position and welcomed diverse thinkers and that she should never work at a place that would fire her for her beliefs, 90% of which he agreed with. Immediately after that meeting, the Rabbi wrote an email to the Senior Rabbi and to the WRT president – which he shared with Ms. Sander -- summarizing the meeting, expressing complete confidence in Jessie as an educator, and stating that she would be a good role model for WRT’s students. One week later, however, that same Rabbi called Ms. Sander to another meeting, this time with the WRT executive director, where the Rabbi fired her. When she asked why, the executive director told her that “it’s just not a good fit.” The facts set forth in the complaint make clear that Ms. Sander was fired solely because of the blog post she co-authored. The Labor Law makes it unlawful for “any employer” to ‘discharge from employment” any “individual” because of her “legal recreational activities,” “outside work hours, off of the employer’s premises and without use of the employer’s equipment or other property.” Such recreational activities include “any lawful, leisure-time activity, for which the employee receives no compensation and which is generally engaged in for recreational purposes, including but not limited” to “hobbies.” Ms. Sander, like many Americans and Jewish Americans, blogged as a hobby, without compensation, and this particular blog post was authored and published months before she began work at WRT. More than 45 prominent Jewish Americans, including rabbis, scholars, and educators, have signed the attached Open Letter to WRT, urging the Temple to reinstate Ms. Sander, and pointing out that “many educators within the Reform movement” have “views similar to those expressed by Ms. Sander,” which “are shared by a growing segment of the Jewish community,” who “are grappling with the role of Zionism in the dispossession of the Palestinian people from their homes and land,” and whose “commitment to Palestinian justice is fully consistent with the Jewish values of, and commitment to, pursuing justice that they learned in Hebrew school and from their families.” The Open Letter can also be found here. Please direct all inquiries to: Robert L. Herbst Herbst Law PLLC 420 Lexington Avenue, Suite 300 New York, NY 10170 tel: 646 543 2354 [email protected] or Jethro M. Eisenstein Profeta & Eisenstein 45 Broadway, Suite 2200 New York, NY 10006 tel: 212 577 6500 [email protected] Attorneys for Plaintiff ... See MoreSee Less

A Hebrew Teacher Called Herself an Anti-Zionist. She Was Fired.

A complaint arguing that a Reform synagogue violated New York labor law could point toward a new strategy for Palestinian rights advocates.
View on Facebook
· Share

Wonderful panel this evening with Transforming Lives. A conversation with family members with incarcerated loved ones as well as formerly incarcerated: ... See MoreSee Less

Transforming Lives: Not Home for the Holidays

A Conversation with Family members with Incarcerated Loved Ones and with Formerly Incarcerated.

@POTUS promised to ban fossil fuel leasing on #PublicLands. Then he hosted the largest offshore lease sale in US history. We're in a #ClimateEmergency & must phase out federal oil & gas NOW. Here's how: ... See MoreSee Less

Legal Petition Calls On Biden to Phase Out Federal Oil, Gas by 2035

Center for Biological Diversity: WASHINGTON— More than 360 climate, tribal, religious and conservation groups petitioned the Biden administration today to use its executive authority to phase out oi...
View on Facebook
· Share

A video clip that gets to the heart of #CommunitiesNotCages ... See MoreSee Less

Communities Not Cages is a grassroots campaign led by impacted people and families across New York State. Together, we are fighting to end mass incarceration...