On Monday, join fellow activists in your community for an important vigil against Keystone XL.

In Westchester, Lisa Moir is organizing a vigil at 7pm tomorrow, Monday, February 3rd, in front of the Blue Pig Cafe in Croton-on-Hudson locate at 121 Maple Street in Croton.  Lisa was a bus captain for one of our buses last year that went to the National Climate Change Action Rally in DC. 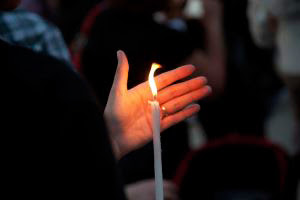 On Friday, the State Department released its final environmental review of the Keystone XL pipeline, and while it was far from perfect, it acknowledged that Keystone XL would lead to increased carbon pollution.

This marks the beginning of the final stretch to defeat Keystone XL. We must mobilize now to show President Obama that Americans stand united against Keystone XL!

On Monday, concerned citizens like you in over 170 towns and cities across the country will come together in their communities to be part of a nationwide vigil against Keystone XL.

Big Oil will be pulling out all the stops between now and when President Obama makes his final decision, so it’s critical that we turn out in large numbers to show the president the strength of our opposition to Keystone XL.

Keystone XL would be an open spigot for the dirtiest source of oil on Earth — Alberta’s toxic tar sands. If Keystone XL is built, it will lock us into decades of carbon pollution and environmental destruction, and it will put our country at risk of even more pipeline spills.

We’re entering the final stretch of this historic campaign, and Keystone XL can still be defeated. Together we’ve already defied all expectations, and together we’ll see this through to the end.