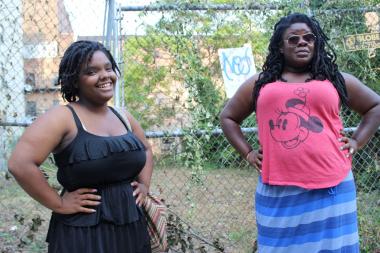 LONGWOOD — Tanya Fields has tried planting her urban farm in a forgotten corner of a local playground and on a long-abandoned private lot.

In each case, authorities uprooted her community garden, which she calls the Libertad Urban Farm, before it could blossom.

But after several years, the food-justice activist may have found her spot — a vacant city-owned site at 972 Simpson St. where locals once grew flowers but which has since succumbed to waist-high weeds and rodents.

Officials recently told Fields they may allow a temporary garden on the 4,300-square-foot lot, at least until potential developers emerge.

Fields envisions local farmers cultivating crops on the lot that could be sold out of her healthy-food truck, among other uses.

“This is about us taking control of our lives,” said Fields, who is converting a former school bus into a mobile farmers market. “We have all the resources we need.”

In 2009, Fields and some of her neighbors on Fox Street built raised beds and planted marigolds and a sandalwood tree in a half-acre corner of the local playground. But when the city began renovating the playground that fall, workers razed the garden and turned it into a dog park.

The following year, Fields and some fellow “guerilla gardeners” decided, after months of trying unsuccessfully to reach the private owner of a long-neglected lot, to break in and plant sunflowers there. The owner showed up with police a few days later and kicked them out.

But recently the local community board pointed Fields to the Simpson Street lot.

Even as that block sprouted new buildings and lively neighborhood associations in recent decades, the site at 972 has gone undeveloped since the city took it over in the early ’80s.

A local group planted a garden there in the ’90s but when that group dissipated, the garden did too, according to Fields.

Since then, trash continues to pile up inside the fenced-in lot and feral cats chase mice and rats through overgrown greenery that city crews rarely trim, said Frank Roberts, who has lived on the block his whole life.

“It’s been sitting there way too long,” said Roberts, 45.

Fields, who heads a small nonprofit called the BLK Projek, her intern Shantrice King and volunteers have collected dozens of signatures on a petition urging the city to give the community access to the lot.

Their efforts appear to have paid off.

A spokesman for the city’s Housing Preservation and Development Department, which controls the site, said the agency would consider allowing a temporary garden there until long-term plans for affordable housing on the site are enacted.

Parks Department officials are set to visit the site next week to determine if it qualifies for the GreenThumb program, which supports temporary community gardens on city lots.

Fields said the garden could include raised plots for residents and school groups, spots for locals to relax or congregate and rows of organic crops that could be sold in her Veggie Mobile Market bus.

Such uses, Fields said, would live up to the ideal planted in the urban farm’s title, Libertad.

“Freeing ourselves from junk food, from the disconnect that we have from the land,” she said. “Being able to be free to dream and innovate and find solutions.”