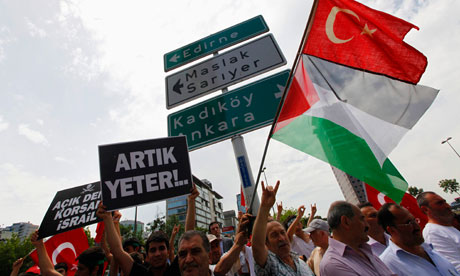 Demonstrators wave the flags of Turkey and Palestine in a protest against Israel in Istanbul yesterday. The banners read ‘Open sea pirate Israel’ and ‘Enough is enough’. Photograph: Murad Sezer/Reuters

Survivors of the Israeli assault on a flotilla carrying relief supplies to Gaza returned to Greece and Turkey today, giving the first eyewitness accounts of the raid in which at least 10 people died.

Arriving at Istanbul’s Ataturk airport with her one-year-old baby, Turkish activist Nilufer Cetin said Israeli troops opened fire before boarding the Turkish-flagged ferry Mavi Marmara, which was the scene of the worst clashes and all the fatalities. Israeli officials have said that the use of armed force began when its boarding party was attacked.

“It was extremely bad and very tough clashes took place. The Mavi Marmara is filled with blood,” said Cetin, whose husband is the Mavi Marmara’s chief engineer.

She told reporters that she and her child hid in the bathroom of their cabin during the confrontation. “The operation started immediately with firing. First it was warning shots, but when the Mavi Marmara wouldn’t stop these warnings turned into an attack,” she said.

“There were sound and smoke bombs and later they used gas bombs. Following the bombings they started to come on board from helicopters.”

Cetin is among a handful of Turkish activists to be released; more than 300 remain in Israeli custody. She said she agreed to extradition from Israel after she was warned that conditions in jail would be too harsh for her child.

“I am one of the first passengers to be sent home, just because I have baby. When we arrived at the Israeli port of Ashdod we were met by the Israeli interior and foreign ministry officials and police; there were no soldiers. They asked me only a few questions. But they took everything – cameras, laptops, cellphones, personal belongings including our clothes,” she said.

Kutlu Tiryaki was a captain of another vessel in the flotilla. “We continuously told them we did not have weapons, we came here to bring humanitarian help and not to fight,” he said.

“The attack on the Mavi Marmara came in an instant: they attacked it with 12 or 13 attack boats and also with commandos from helicopters. We heard the gunshots over our portable radio handsets, which we used to communicate with the Mavi Marmara, because our ship communication system was disrupted. There were three or four helicopters also used in the attack. We were told by Mavi Marmara their crew and civilians were being shot at and windows and doors were being broken by Israelis.”

Dimitris Gielalis, who had been aboard the Sfendoni, told reporters: “Suddenly from everywhere we saw inflatables coming at us, and within seconds fully equipped commandos came up on the boat. They came up and used plastic bullets, we had beatings, we had electric shocks, any method we can think of, they used.”

Michalis Grigoropoulos, who was at the wheel of the Free Mediterranean, said: “We were in international waters. The Israelis acted like pirates, completely out of the normal way that they conduct nautical exercises, and seized our ship. They took us hostage, pointing guns at our heads; they descended from helicopters and fired tear gas and bullets. There was absolutely nothing we could do … Those who tried to resist forming a human ring on the bridge were given electric shocks.”

Grigoropoulos, who insisted the ship was full of humanitarian aid bound for Gaza “and nothing more”, said that, once detained, the human rights activists were not allowed to contact a lawyer or the Greek embassy in Tel Aviv. “They didn’t let us go to the toilet, eat or drink water and throughout they videoed us. They confiscated everything, mobile phones, laptops, cameras and personal effects. They only allowed us to keep our papers.”

Turkey said it was sending three ambulance planes to Israel to pick up 20 more Turkish activists injured in the operation.

Three Turkish Airlines planes were on standby, waiting to fly back other activists, the prime minister’s office said.

For those of you who missed yesterday's presentation at WESPAC, I highly recommend taking the time to watch this 40 minute clip. It is truly outstanding. Jafar and Suha give us so much hope and inspiration for the future of Israel/Palestine. They are eloquent, passionate, deeply committed and model precisely how and why the Palestinian citizens of Israel are gamechangers for the region. They will return to WESPAC next year with a bigger delegation including Jewish citizens of Israel as well as potentially Members of the Knesset. We were so delighted to host them:youtu.be/T3fTKnC5xIM ... See MoreSee Less

An outstanding discussion at WESPAC about the work of the Mossawa Center in Haifa as well as the gamechanging role that Palestinian citizens of Israel play i...

Hello all,You are welcome to join us on Wednesday, October 13th, at 12:30pm at WESPAC location here. Please note it is a bring your own lunch. Building management requires the wearing of masks indoors.We are very much looking forward to welcoming Suha and Jafar at WESPAC!Join us and the WESPAC Foundation for a lunch discussion with Jafar Farah and Suha Salman Mousa of the Mossawa Center to hear why they believe Palestinian citizens of Israel have the potential to completely shift the political landscape in Israel and build a multi-ethnic coalition advocating for a just and long lasting peace in the region. They will talk about who Palestinian citizens are, the challenges they face, and the untapped power they have in Israeli politics.The talk will be this Wednesday, October 13, 12:30 EST at 77 Tarrytown Road, Suite 2W White Plains, NY 10607. ... See MoreSee Less