News on the Iraqi Student Project 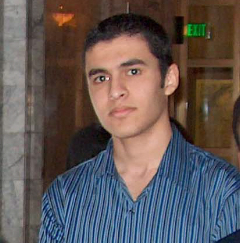 We tried to stop the war on Iraq, but did not succeed. Helping Iraqi refugee students complete their college education is one small thing we can do in recognition of the grave injustice our country perpetrated in Iraq.

It was a year ago, summer 2008, when the Iraqi Student Project (ISP) was presented to the Westchester community, at the Wespac Pleassantville office. Now, a year later and with the generous help of many people, Mustafa Ahmed, an Iraqi refugee student will arrive in mid-August to attend Manhattanville College. M

The new arrivals, along with Mustafa, will be Raed Ibraheim Al-Abbasee at Bard College and Randa Mohammed at TCI in New York City. Thirty other Iraqi students will be studying in colleges across the country. Here are pictures of Raed, who will be at Bard, and Randa, who will be at TCI, in NYC.

These Iraqi refugee students are among more than 2 million who have fled Iraq for safety in Jordan and Syria. Their education was interrupted as they fled with their remaining family from the war, the occupation and sectarian violence. In most cases, family members were killed or kidnapped and held for ransom. Others were forcibly evicted from their homes. The war will not soon be over for the Iraqis who cannot return to their homes, nor for the Iraqi widows, for the wounded, for a broken society, or for the American military families who have lost a daughter or son. The Iraq war is not over. Like Viet Nam, this war will linger in an American society negotiating its own post trauma disorder.

The ISP/Westchester Support Group was organized and we have been working hard throughout the year to raise the necessary additional funds Mustafa needs to cover costs for room and board, health plan, texts, college fees and a monthly stipend — in all over $8,000 a semester. We had a successful event in June at Mirene Ghossein’s home (see previous blog entry and click here to hear some of the wonderful Middle Eastern music that was performed there and see some pictures). Generous financial support came from many, including an empowering grant from the Glickenhaus Foundation. Seth and Sarah Glickenhaus.

Many Wespac members have helped this project develop and all of you can be part of the continuing support group for Mustafa:
* You can be responsible for helping him adapt to a new culture.
* You can organize speaking events for him at local high schools.
* You can host him in your home during school holidays.
* You can invite Mustafa to see the neighborhoods of New York City with you as the guide.

We’ll keep writing about the Iraqi Student Project, but you can also learn more about how you can contribute at www.westchestersupport.org.

The support group gathers around Mustafa with a clear commitment to help as needs arise throughout the next four years.
We can now greet Mustafa as he arrives at JFK from Amman, Jordan on August 22. He will report to Manhattanville College on August 26th.