The War on Gaza is Not Over — The Farmers 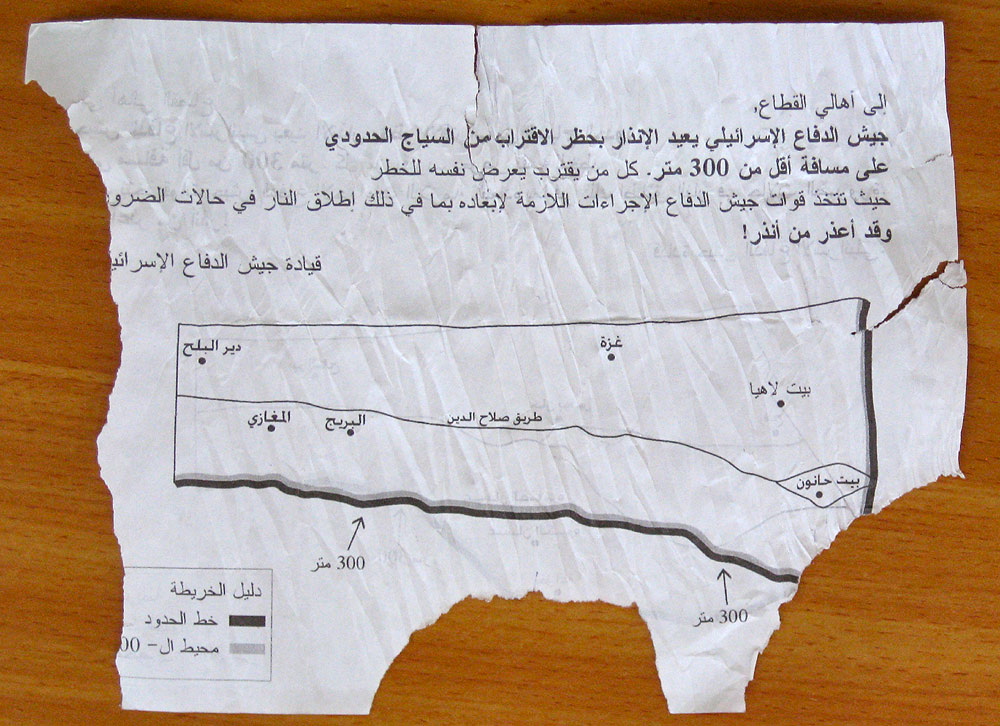 A few weeks ago Israel dropped leaflets warning people living along the eastern border that Israel decided the 300 meters next to the border (on the Gazan side naturally) should be a no man’s land. Imagine, if you can, how you would read a leaflet like this if you received it!

During the invasion, Israel added automated watch towers along the border fence, in addition to the watchtowers which were constructed when the border fence was built. These automated towers are gold domes that, when activated, open up like a flower and fire machine guns. They are remotely controlled, fired by soldiers watching a computer screen, maybe in Tel Aviv. Just another step in turning war into a video game. It makes it so much easier to kill people.

We learned that, although Israel states in its leaflets that the "buffer zone" of annexed land is 300 meters, it depends on the topography and acquifers. In some areas, it is as much as 1500 meters (about a mile). Farmers tending their fields outside, but near, the "buffer zone" are also being shot at. We visited with a farming family, the Abu Rijelas, living near the border. Their house is about 350 meters from the border. 300 meters from the border is a road which all the schoolchildren must use when they walk to or from school.

In addition to worrying about their children being shot on the way home from school, the Abu Rijelas have other things to worry about. Two years ago, the husband was kidnapped by the Israelis, and sentenced to 6 years in jail. His wife has only spoken with him twice since then. This is now a family of tough, smart women. The oldest daughter is at the university, studying communications, and the mother has returned to the university to study psychology. Their house had been damaged by a missile strike during the Israeli attacks, and they said, the fields were full of fragments of white phosphorus. When we walked around outside, we quickly found one, scraped it with a stick and it burst into flame. This kind of debris should make plowing and planting a scary exercise even if automated machine gun towers weren’t shooting at you.

The Abu Rijelas also lost their wheat crop when the Israelis fired incendiary shells onto their land, setting the fields on fire. They felt lucky their house wasn’t burned as well. Israel also used the invasion of Gaza as an opportunity to demolish forty homes near the border and plow under all the orchards in front of them. Forty demolished homes equals about 400 homeless people, I would guess about 10% of the population of the little farming village. It’s difficult to imagine how this wanton destruction could possibly be justified. The farmers association, the Center for Rural Improvement, has made a videotape document the conditions entitled "Eye on the Border

ISM (the International Solidarity Movement) has been accompanying farmers as they attempt to farm their fields. This deters, to some extent, the wanton firing on farmers. The farmers have been trying to plant wheat or very quick growing crops like peas or spinach, hoping to harvest them before even more land is annexed. A farmer was killed at the end of January. Further information can be found at "Farming Under Fire". Although Gaza appears to be intensively farmed, with almost every open space planted with something, the farmers’ association we met with, the Agricultural Development Association (PARC) estimates that about 60% of the agricultural land in Gaza is unusable — either polluted by chemicals like white phosphorus, bulldozed, or in areas where farmers will be shot by Israelis if they farm.