Up to 200,000 protest Israeli aggression in Central London 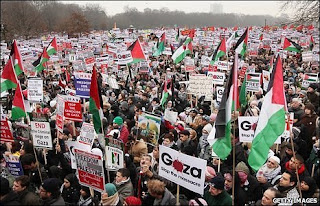 The estimated turnout for this protest, according to Andrew Murray, was 200,000. I don’t mind what precise figure people put on it, but it was massive, and certainly above 100,000. To this can be added the protests across the UK, which respectively numbered in hundreds and thousands. As I said earlier, this was the largest ever pro-Palestinian demonstration in the United Kingdom. I met a guy I know from MPAC at the start, and he agreed that the size of the demo was astonishing – this was as we were crowding into Hyde Park, before it even really kicked off. The severity of what Israel is imposing on Gaza, with the assistance of UK arms and the benevolence of UK diplomacy, has galvanised people in a way that we haven’t seen since 2003. The tone of the protest was also very different from past demonstrations. For one thing, there was much more visible condemnation of the Arab regimes that are complicit in this attack. When speakers called for the Egyptian regime to be overthrown, the cheers were among the loudest of the day. For another, there is a great desire that this historic demonstration become the basis for a campaign. In some form or another, there is a desire to sanction Israel, up to and including a full-blown boycott, divestment and sanctions campaign. I would be delighted if such a campaign could be made to work.

This brings me to something else I want to point out about the demonstration. In today’s Guardian, over seventy Jewish writers and activists wrote to condemn Israel’s atrocities in Gaza. The letter calls for a campaign of boycott, divestment and sanctions, which was also recently backed by Naomi Klein. This letter was cited twice by speakers, one of them Azzam Tamimi, who said “this war is not between Muslims and Jews, it is between the oppressed and the oppressor”. The other speaker who I think was Ismail Patel said something that I think is extremely important, reflecting what Alexei Sayle said at last week’s demonstration: it is long past time to stop allowing the state of Israel to call itself “the Jewish State”. It is a travesty that a racist state that imposes apartheid and mass murder on the Palestinians has for so long been allowed to legitimise itself with reference to Jewish suffering, and particularly the Nazi holocaust. When its soldiers are bestialising themselves in Gaza, coldly murdering people in the most humiliating way, and imposing a system that seems in some respects to be deliberately redolent of the Warsaw Ghetto, the idea that Israel is the bearer of a legacy of resistance to fascism is disgusting, and absurd. Now, I know full well that we are not watching a repeat of the Final Solution, but it shouldn’t have to get that far before Palestine has its Marek Edelmans. And we should not hesitate to support them when they defend Palestine.

Finally, a word about the apparent ruckus outside the Israeli embassy. I didn’t see it become at all serious, but I do know the police sealed off hundreds and perhaps more people in the area, and it has to be said that the police acted as if they wanted a fight. They had tried to confine an enormous amount of people into a densely barricaded bottleneck and, as far as I could see, this made the stewards’ job more difficult. A number of protesters did evidently want to get into the Israeli embassy, and I did notice that one of them got onto the entrance walls and waved a Hamas flag around. Frankly, good. The logical thing to do at this point would be to expel the Israeli ambassador and convert the building into the embassy of a future Palestinian state. But, as angry as people justifiably are, and as much as one would have every reason to expect a riot at this point, I personally saw nothing that could have even notionally justified the kind of clampdown that the police eventually imposed.

Update: Here is the poem that Michael Rosen wrote, and read out for the protest:

In Gaza, children,
you learn that the sky kills
and that houses hurt.
You learn that your blanket is smoke
and breakfast is dirt.

You learn that the night is a gun,
that toys burn
breath can stop,
it could be your turn.

You learn:
if they send you fire
they couldn’t guess:
not just the soldier dies –
it’s you and the rest.

And since my digital camera wasn’t working today, here are some good quality pics from Ellis Sharp. More from septicisle here. Jamie’s pics, videos and report are here. See also, pictures from the Paris demo.